Corals are marine invertebrates in the class Anthozoa of phylum Cnidaria.

They typically live in compact colonies of many identical individual polyps. The group includes the important reef builders that inhabit tropical oceans and secrete calcium carbonate to form a hard skeleton.

A coral group is a colony of myriad genetically identical polyps. Each polyp is a sac-like animal typically only a few millimeters in diameter and a few centimeters in length. A set of tentacles surround a central mouth opening. An exoskeleton is excreted near the base. Over many generations, the colony creates a large skeleton that is characteristic of the species.

What do corals eat

Although some corals can catch small fish and plankton, using stinging cells on their tentacles, most corals obtain the majority of their energy and nutrients from photosynthetic unicellular dinoflagellates in the genus Symbiodinium that live within their tissues.

These are commonly known as zooxanthellae and the corals that contain them are zooxanthellate corals. Such corals require sunlight and grow in clear, shallow water, typically at depths shallower than 60 metres.

Corals are major contributors to the physical structure of the coral reefs that develop in tropical and subtropical waters, such as the enormous Great Barrier Reef off the coast of Queensland.

Other corals do not rely on zooxanthellae and can live in much deeper water, with the cold-water genus lophelia surviving as deep as 3,000 metres.

Coral polyps also feed on a variety of small organisms, from microscopic zooplankton to small fish. The polyp's tentacles immobilize or kill prey using their nematocysts.

These cells carry venom which they rapidly release in response to contact with another organism. A dormant nematocyst discharges in response to nearby prey touching the trigger (cnidocil). A flap (operculum) opens, and its stinging apparatus fires the barb into the prey. The venom is injected through the hollow filament to immobilise the prey; the tentacles then manoeuvre the prey to the mouth.

How do Corals reproduce?

Corals can be both gonochoristic (unisexual) and hermaphroditic, each of which can reproduce sexually and asexually.

Individual coral heads grow by asexual reproduction of polyps. Corals also breed sexually by spawning: polyps of the same species release gametes simultaneously over a period of one to several nights around a full moon.

Coral species have a varied sex life. The majority of species are simultaneously both male and female (hermaphrodites) and typically pack both eggs and sperm (gametes) into buoyant bundles that are released synchronously after dark. The bundles float to the surface and open, allowing the eggs to meet sperm. Less commonly, some coral species have separate sexes, and a few species release asexually produced clones of themselves. For all species with sexual reproduction, fertilised eggs develop into mobile larvae that settle on the sea floor and become polyps which become the beginning of a new coral colony.

Mass spawnings are spectacular events, in which many coral species release their gametes at specific times. Sometimes more than 100 species spawn on a single night, or over a successive nights. Reefs in the inner Great Barrier Reef spawn during the week after the full moon in October, while the outer reefs spawn in November and December. Its common soft corals belong to 36 genera. 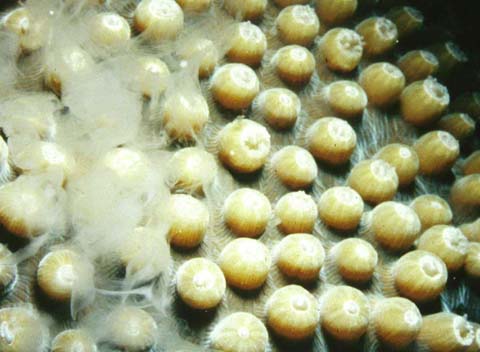 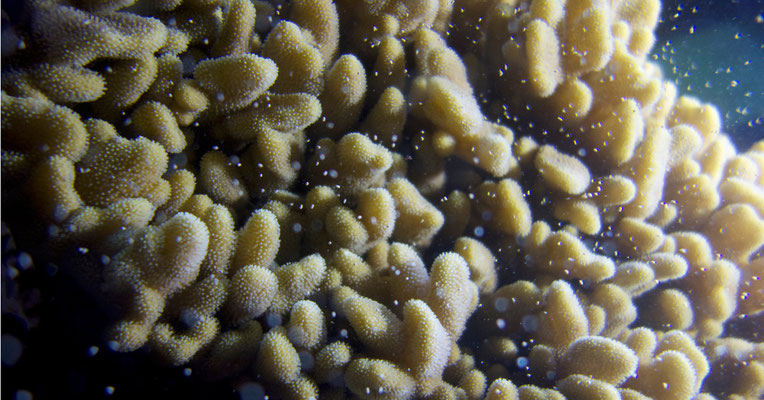 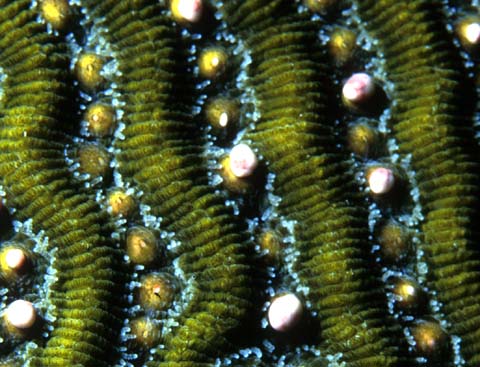 Corals can reproduce asexually as well as sexually. In asexual reproduction, new clonal polyps bud off from parent polyps to expand or begin new colonies. This occurs when the parent polyp reaches a certain size and divides. This process continues throughout the animal’s life.

How do Coral Reefs form?

Each coral polyp is a sac-like animal typically only a few millimeters in diameter and a few centimeters in length.

As part of normal growth an exoskeleton is excreted near the base of each polyp.

Over many generations, the colony creates a large skeleton that is characteristic of the species.

Corals are major contributors to the physical structure of the coral reefs that develop in tropical and subtropical waters, such as the enormous Great Barrier Reef off the coast of Queensland, Australia.

Four hundred coral species, both hard corals and soft corals inhabit the reef. The majority of these spawn gametes, breeding in mass spawning events that are triggered by the rising sea temperatures of spring and summer, the lunar cycle, and the diurnal cycle.

When corals are stressed by changes in conditions such as temperature, light, or nutrients, they expel the symbiotic algae living in their tissues, causing them to turn completely white. Warmer water temperatures can result in coral bleaching. When water is too warm, corals will expel the algae (zooxanthellae) living in their tissues causing the coral to turn completely white.

This is called coral bleaching. When a coral bleaches, it is not dead. Corals can survive a bleaching event, but they are under more stress and are subject to mortality. Coral bleaching is theorized to be a generalized stress response of corals that may be caused by a number of biotic and abiotic factors, including:

While most of these triggers may result in localized bleaching events (tens to hundreds of kilometers), mass coral bleaching events occur at a regional or global scale and are triggered by periods of elevated thermal stress resulting from increased sea surface temperatures. The coral reefs that are more subject to continued bleaching threats are the ones located in warm and shallow water with low water flow. Physical factors that can prevent or reduce the severity of bleaching are available for the reefs located under conditions that include low light, cloud cover, high water flow and higher nutrient availability.

Why do whales keep getting tangled in shark nets? And what should you do if you see it happen?

Millions of years ago, the megalodon ruled the oceans – why did it disappear?

The Oceans cover 70% of the earths suface

The deepest part of the ocean is called the Mariana Trench, which is around 7 miles deep and is located in the South Pacific Ocean.

The water pressure at the bottom of the Mariana Trench is eight tons per square inch. This means the pressure there is enough to crush you.

The largest mountain range is found underwater and is called the Mid-Oceanic Ridge that is around 40,390 miles long.